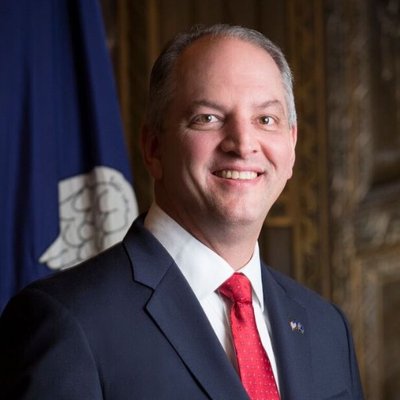 contact Governor John Bel Edwards
Governor John Bel Edwards was born seventh out of eight children to Sheriff Frank Jr. and Dora Jean Edwards. He grew up hunting and fishing in Amite, a rural town in Tangipahoa Parish. He and First Lady Donna Edwards began dating while students at Amite High School. After graduating top of his class, Gov. Edwards attended the United States Military Academy at West Point. As a cadet, he completed Airborne School and served as vice-chairman of the panel that enforces the West Point Honor Code. The governor graduated from West Point in 1988, commissioning as a second lieutenant in the U.S. Army. He served on active duty for 8 years, earning Airborne, Ranger and Jumpmaster status, culminating with command of a rifle company in the 82nd Airborne Division at Fort Bragg, North Carolina. In 2008, the people of House District 72 elected him to the Louisiana House of Representatives, where he represented the people of Amite, Greensburg, Kentwood and Hammond for eight years before being elected governor in November 2015. On January 11, 2016, John Bel Edwards was sworn in as the 56th Governor of Louisiana. On November 16, 2019, the people of Louisiana re-elected Gov. Edwards to another four-year term. On January 13, 2020, Gov. Edwards was sworn into his second term as the 56th Governor of Louisiana.